On my second day teaching at Hillside High in 2007, several students asked me if I planned to come back for the following year.  My second day.  The answer (yes) was easy, but the question was shocking.  Our students had seen so much tumult and turnover in previous years that they had grown used to the instability that stood in the way of their education.  Right there, I learned one of the most important lessons that any educator could ever glean from their students–young people need stability.  They can be pushed, they can grow, and they can transcend limits put in front of them, but they need to feel safe, supported, and loved in order to do it.

Little River Elementary School students feel safe, supported, and loved.  And that makes all the difference.

For today’s visit, veteran educator Xavier Cason once again joined me as we sought to get the good news about Durham exciting new experiment–a pre-K through 8th grade school.  In case readers don’t know, traditional public schools these days are organized around Elementary (pre-K/K through 5th), Middle (6-8), and High (9-12) age ranges.  There are exceptions, of course, but Little River is the district’s newest experiment, and the staff and community here are more than equipped to lead the charge.

The principal reason, I would argue, is the stability of the school.  While many schools, particularly in the current climate, are plagued with a revolving door of staff, the Little River team lost 3 people last year, all due to retirement; and nearly every person we talked to had been at the school for years.  Parents also contribute to this sense of stability, as many of them drive their kids to school and walk them to class, ensuring that kids constantly move from one caring adult to another.  This stability matches the goal behind the pre-K through 8th transition, which is built to allow students to grow in one place, with the same people, for a longer period of time.

Becky Nichols, in her 6th year as a TA at Little River, explained to us how exciting the pre-K through 8 model could be because of the stability that it allowed working class parents.  Instead of having multiple kids in multiple locations, sending their kids to Little River for 8 years would allow parents some logistical ease.

Michelle Harrell, a TA with 7 years at Little River, talked about the school as a family, with the whole staff focused not just on instruction, but the mental, emotional, and physical health of all their students.  TAs at Little River, she shared, are treated like fully-licensed teachers, and engage with the whole student in a way that doesn’t take away from, but enhances their ability to learn.

Candace Dymond (8 years at Little River) and Ashley Turley (3 years at Little River) continued the whole-child refrain, noting that parent engagement at Little River is second to none.  The endless stream of parents walking past us to deliver their children to the classroom made it clear that the school is a welcoming environment that students, parents, and staff experience as an extension of their homes. 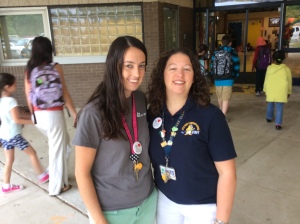 Tonya Stockburger (17 years at Little River) beamed when she compared the first workdays of the school year to the beginning of a college year when old friends returned to their dorms and couldn’t wait to reconnect.  I’ve never heard a teacher talk about workdays with such zeal, and the language of family emerged again as she told us how cool her school is.

Furthering the family-centeredness, Joann McAdon (7 years at Little River) shared that she BECAME A TEACHER because her three children attended Little River and had such good experiences that she knew that she wanted to teach, and teach there.  Veteran teachers, she noted, run into students and parents, and then students who have become parents, at the grocery store and other outside-of-school sites–extending the continuity beyond the walls of the building.

Novella Freeman, who has taught in the same room for 20 years straight, named the parent involvement, quality of staff, and the eagerness of the children to learn as the three keys to Little River’s success.

Further down the hall, the newcomers Mary Ross and Leilani Owens are Team Tsunami, the new 6th grade teachers leading the experiment in the school’s expansion towards 8th grade.  Mary noted the continuity in relationships across grade level, and the excitement that teachers have about being able to follow the development of their students for longer as the things that she is most excited about in the new model. 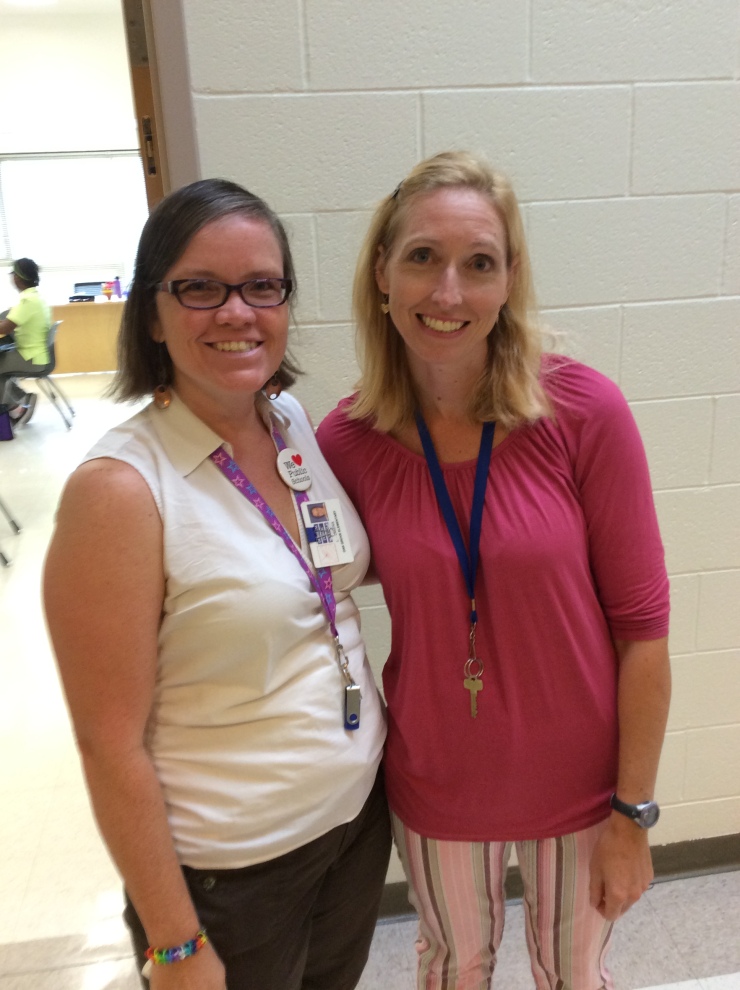 After checking in on the 6th grade team, Mr. Cason and I got to have a nice long sit 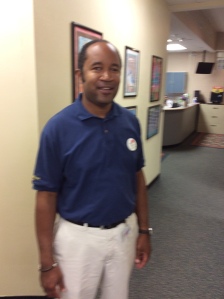 down with principal Cory Hogans.  Dr. Hogans is as erudite as it gets, and he schooled us on the history of the school’s development, from its days as the unofficial “Treyburn Day School” to the challenges of demographic transition brought by economic changes in the area and the introduction of a charter school that has recruited many Little River families away.  Throughout the shifts, however, he pointed to the stability of the staff, and their eagerness to address new challenges, as the key to the school’s effective transition.  From there, we waxed philosophical about demystifying the components of a school’s success, mechanisms for engaging parents, race/racism, and the need to create a counter-narrative to the “public schools are failing” discourse that does nothing for our kids and everything to further the interests of those working to dismantle and privatize our schools.  After nearly an hour, we finally left Dr. Hogans’ office to continue our tour. I don’t know about Mr. Cason, but I could have stayed and talked for hours. 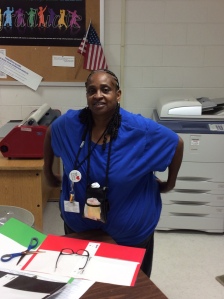 Little River’s Assistant Principal, Ken Lesher, has been at Little River for less than a year, but immediately named the tight-knit staff as the center of the school’s success.  “Everybody really knows each other,” he noted, pointing that it made it easier to engage staff in school-wide decisions, furthering the sense of integration and continuity.

Around the corner, Administrative Assistant Dawn Searls immediately smiled when I asked her what was good about Little River.  “Everything!” exclaimed the 20-year Little River veteran, sharing that “when someone is down, everybody rallies,” whether the problem is personal or professional. 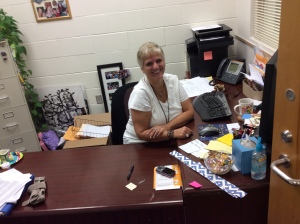 Demajio Lawson, in his first year at Little River, also called the school a family, noting that everyone always has smiles on their faces, “even after lunch” when the kids can tend to get a little rowdy. 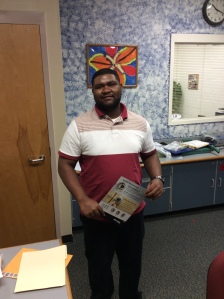 Carrie Kirlauski, a music teacher with 8 of her 10 years at Little River, talked about

teachers who came to school at Little River, teach at Little River, and bring their kids to Little River.  It’s the “cocoon that envelopes you,” and makes the kids feel loved.  Adding some politics to her point, she named the “pushing out of veteran teachers” as the biggest mistake in the state’s current attacks on public schools, noting that the stability of the veterans drives the sense of emotional safety that Little River students feel.

Even the new kids, it seems, aren’t new.  Russell Strand, a third year teacher in his first year at Little River, went to the school, and was convinced to become a teacher by the staff when he came back to volunteer there as an adult.  The “open and generous” staff displays “no negativity” and students follow the lead. 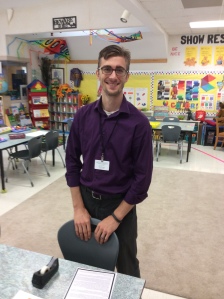 To push the continuity point even further, Russell told us his story in Barbi Smith-Bailey’s classroom, who taught him in 4th and 5th grade.  Smith-Bailey is an institution at Little River, working there for 36 of her 37 years.  She was named as a leader by so many of the staff, and its clear that her influence is felt broadly in the building.  When asked why she keeps coming back, Smith-Bailey noted that “we are allowed to teach, and kids are excited to learn.”

And last, but certainly not least, Mr. Cason and I had the pleasure of talking with Lorenzolla Parker, the school’s treasurer.  Ms. Parker graduated from the then-K-through-12 Little River, went to North Carolina Central University, and returned to the school, where she has spent the last 44 years.  By my math, that means that she has spent all but about 9 years of her life in the building, and her presence in the front office serves as a constant reminder of the stability of the space.

So yes, the pre-K through 8th grade experiment at Little River is provocative and new. But the stability of the school’s parents and staff provide the perfect anchors for what will undoubtedly be a continuation of the school’s long history of success.

Thanks for hosting us Little River.  I can’t wait to come back and see the same smiling faces again.