“You can’t put a number on kids.  We’re talking about the WHOLE CHILD.”. 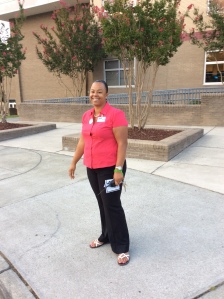 In one sentence, new principal Kecia Rogers summed up the philosophy of Rogers-Herr Middle School and set the tone for what I would hear from her staff all day long.  Despite the constant demand for increased testing and child-punishing curriculum coming from corporate reformers, the Rogers-Herr staff has nurtured a loving environment where young people get to be their full selves, and the staff constantly collaborates to meet the needs of the young people they work with.

Thomas Holloway met me in the morning and didn’t hesitate to share that the best things about Rogers-Herr are the atmosphere and the people.  He argued that the school has some of the top teachers he’s seen and that the janitorial staff is A1.  “Everybody knows each other’s strengths and weaknesses and steps in to support each other,” he noted, before he playfully teased and giggled with some students on their way through the school’s lobby.

Tony Hemphill, the school’s ISS coordinator echoed the sentiment, noting that the school’s staff is well-educated and always willing to help each other to make sure that students succeed. 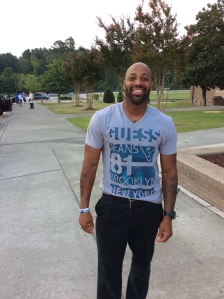 On my morning tour with Ms. Rogers, who is clear that she was put on this planet to be an educator, I got to see examples of this collaborative spirit first hand.  For their morning enrichment classes, the staff created a “One Book, One School” initiative that had every student in the school reading “Discovering Wes Moore” as a way to talk about both the environmental factors that shape people’s lives, AND the ability that individuals have to transform their realities (in addition to using the exercise as an opportunity to build literacy skills and critical thinking).  Every class that we went into was conducting a lesson on the book, focusing on Moore’s examination of Hip-Hop culture as an essential part of how he became who he is.  Some classes were reading aloud from the text, others brainstorming and creating art in small groups, and still others were analyzing the lyrics from Macklemore’s “Wings” to discuss the social pressures that young people feel to conform to society’s vision of who they should be.  The discussions kids were having with each other and their teachers were provocative, and it was confidence-inspiring to see all the different ways that teachers were interpreting the common lesson, collaborating with their own individual twists. The examples of student learning that filled the hallway extended the atmosphere of scholarship beyond the classroom, and deepened my understanding of the student-driven atmosphere that nearly every staff member referred to readily. 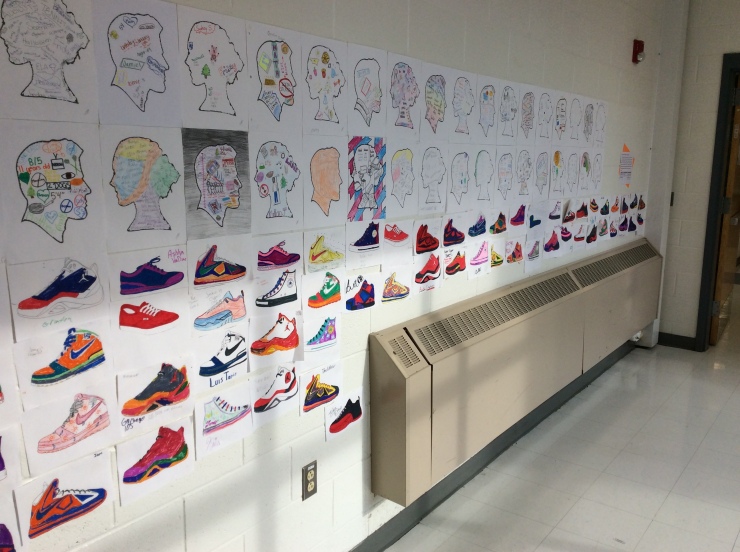 This same student-centered approach extends beyond the school day, as kids have an opportunity to play sports and join

more clubs than I’ve ever heard of a school having.  Students can participate in spelling and geography bees, a number of different “quiz bowl”-type of teams, Chess Club, Garden Club, Odyssey of the Mind, Lego League, Science Olympiad, NC Envirothon, Math Counts, Speech Club, Debate Club, Robotics Club, Battle of the Books, a writing competition called The Quill, and a jazz band to supplement the band that students can take during the day, to name more than a few, but nowhere near all.  Dov Rosenberg, who has been at Rogers-Herr for 10 years and works with many of these clubs, pointed out that strong parent participation is one factor that allows these clubs to thrive. The idea is to provide multiple avenues for “hooking” students outside of the classroom, and the staff either initiate the clubs on their own or create them responding to student needs and desires.  Data Manager Hope Samuels pointed towards the goal that “not a single kid gets left out.”  The most recent example is a sign language club requested by students who want to be able to communicate with and better support hearing-impaired students in the school. 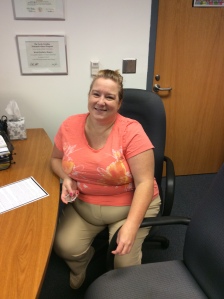 Art teacher Joanne Andrews exemplified the ways that individual creativity and initiative are fostered in the school’s culture.  With works by Romare Beardon, Frida Kahlo, and Dorothea Lange in the background, she moved from station to station, helping students analyze and map the body shapes in photographs they had chosen to study.  She pointed out that the kids are serious about their work, and while she noted that the administration both supported her and allowed her the freedom to create in the classroom, she was extending the same spirit to her students.  AIG Facilitator Jennifer Miske also noted that staff are allowed to develop as leaders and get to chart their own path at Rogers-Herr. 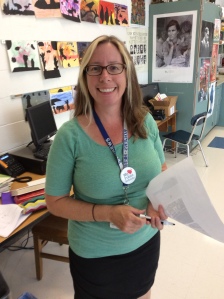 This culture of support and initiative was reinforced by Madison Hux, a first year teacher who pointed towards her grade level team’s compassion and care as the key to reducing the overwhelming feelings that come along with being new in the classroom.  Using the Macklemore lyrics in the “One Book” lesson was her idea, and she was excited to get to both contribute her big ideas and be reeled in a bit by veteran team members who believe in her. 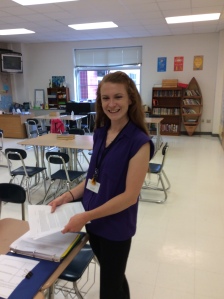 Beth Amerto, in her 3rd year at Rogers-Herr, echoed the gratitude for the support that she’s received from her teammates.  As a recent transplant to Durham, she was clear that her co-workers’ taking her under their wings was the key to her ability to do the work in the ways that she wants to.  She noted that she can always ask for feedback and have both teachers and administrators respond to meet her needs.

I caught Brent George and Vicki Waugh in the copy room, and they said, separately, that collaboration was the key to the school’s success.  Ms. Waugh noted, in particular, the ways that Exceptional Children’s teachers worked hand in hand with other staff to meet the sometimes-challenging needs of their students. 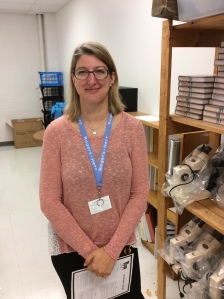 Mike Williams, once I pushed him past, “what’s not good about Rogers-Herr?” pointed to the ways that the staff’s culture of collaboration and support trickles down to the students.  He works with students who have autism and noted that the school’s non-autistic students always respond lovingly when his kids experience challenges in the classroom. 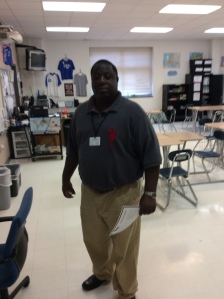 A story from cafeteria worker Twanna Surrate sounded similar.  She smiled broadly when she talked about learning Spanish from some of the students and passing along the lessons to her co-workers.  And though I couldn’t get her to pose for a photo, her story reinforced all that I had been hearing throughout the building.  “The student and staff relationships,” she noted, were the strength of the school, sharing that it was clear that kids in the building always had someone caring to talk to, and that that responsibility didn’t all fall on the school’s counseling staff.

Media Coordinator Jenny Umbarger echoed the caring-and-collaborative-adult theme, noting that staff are always ready to have each other’s backs. 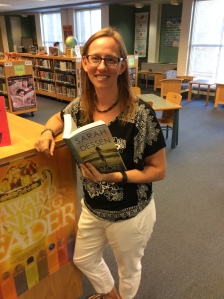 Glenn Estacio, who experienced teaching high school as isolating, also named the spirit of collaboration as the factor that has kept him coming back to Rogers-Herr.  His team works hard to integrate their curriculum and develop projects that weave interdisciplinary approaches to learning across any number of classes.

Lauren Barker was quick to point out that this spirit of collaboration extends to students as well, noting that her kids work together easily and readily across a diversity of cultural backgrounds.  This sense of belonging that the students bring, according to 17-year Rogers Herr vet Beth Spataro, is aided by the legacy of multiple siblings, and even the children of former students, attending the school.  Her statement that “it’s a close-knit family,” then, took on multiple meanings.  6th-year teacher Sarah Jamieson also used the word family, adding to the communal chorus I heard throughout the day.

Very few staff members personify the reality of this legacy better than Annie Townsend.  She has spent 22 years at Rogers-Herr and said simply, “everybody feels comfortable here.” 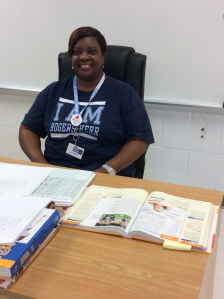 Again and again, the staff noted that the administrative team has helped to set the tone for the sense of collaboration and support that is central to the school’s culture.  5th year Assistant Principal Myra Penuel and 14th year Assistant Principal Lance Scott have been a steady presence in the midst of a Principal transition, and their philosophical approach to school leadership shines through.  Scott’s comments that “people have a sense of peace when they walk in this building” stood out, and my experiences throughout the day revealed the truth in his words.

Rogers-Herr is a special place.  And the whole-child-centered team of students, staff, and parents connected to it are clearly very lucky to have each other.  Thanks for hosting me Rams.  I can’t wait to spend a day with your family again soon.

4 thoughts on “What’s Good at Rogers-Herr?”