(Pre-Script Disclaimer:  Much of what you are about to read is written ironically.  I actually think that the pedagogy practiced at Morehead Montessori Elementary School is really awesome.  Keep up.)

There is a nefarious plot afoot in Durham today.  The fact that it’s been functioning in plain view at the corner of Cobb and Arnette streets for decades should give all of our county’s residents pause, and my hope in calling attention to it today is that someone will act before it’s too late.  I’m clear that I’m taking a risk by shining this spotlight, but something must be done.

The adults who work at Morehead Montessori Elementary School believe that young people, given developmentally appropriate tasks and boundaries, will learn best if they are set free to collaborate, inquire, and discover the world with each other and on their own.  They believe that teachers are facilitators and guides, and that the development of whole human beings, not the % of correct bubbles filled out on a form, is their primary task.

I’m not sure about you, but I’m concerned.

Dr. Renee Carmon has been overseeing this scandalous venture for the last 4 of her 28 years in education, and she ran down the details for us while she served triple duty as the school’s Principal, Assistant Principal (she doesn’t have one due to the school’s small size),and Secretary (who was out for the day).  Because the Montessori method proposes developmental stages rather than sharp age-based distinctions, the school is broken into 4 Primary classes (Pre-Kindergarten and Kindergarten), 4 Lower Elementary classes (1st through 3rd), and 3 Upper Elementary classes (4th and 5th), in addition to the Exceptional Children’s class and the Exceptional Children’s/Multi-Handicapped class. Montessori’s philosophy, according to Carmon, emphasizes independence, community building, collaboration, inquiry and project based learning, and freedom within developmentally appropriate limits.  The students here still follow the Common Core curriculum, but all staff use an “I do, we do, you do” approach, where they model and the students practice as a class before individuals and small groups work together to master tasks.

Because of the limitations imposed by budget cuts, the true model of two trained Montessori teachers per classroom is not possible, but as we have seen in every school we visit, Instructional Assistants play a huge role in each classroom and throughout the school.  With several faculty members out at trainings or struggling with a sickness that has recently hit the school’s halls, it became clear that the entire staff here is equipped to carry out the tasks of this educational experiment in a variety of ways.

One element that keeps the school successful is the high level of engagement from students’ families.  We spoke with Jarin Frederick, the school’s PTA President and mother of a student in the Lower Elementary.  “We’ve all drunk the Kool-Aid,” she claimed, noting that the commitment of the students’ families is “insane.”  Clearly, the choice to send their students to such a shocking place is crazy, so it’s no wonder the parents stay involved. 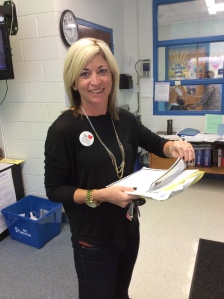 Instructional Assistant Kaitlin Casiano, in her first year at the school, called the parent and community involvement Frederick referred to as “amazing.”  She noted that people are “loving and living in this building” before, during, and after school. 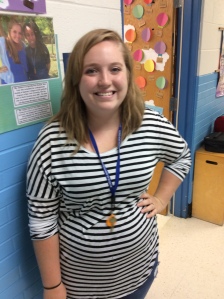 Katherine Arnold is in her 2nd year as a Lower Elementary Teacher, and she also noted the commitment of the parents.  She has worked in schools where parents couldn’t be as engaged due to economic constraints, and she is clear that it makes a huge difference. The Morehead parents, Arnold says, put their time and energy into making a difference, “not just for their own kids, but for all the kids.”  Apparently, some of them continue to stay involved in the community after their own children move on to middle school because they had such positive experiences at Morehead.

The kids, according to Upper Elementary Teacher Kim Alton, are what makes Morehead so special.  She gushed, “They think, they’re active, they challenge me, they make me think outside of the box, they work together, they learn how to cooperate.  They are amazing individuals.”

Moved by the trust for young people that both Alton and 10-year Morehead veteran Sharon Thomas have for their students, I decided to ask some of them myself.  Thomas’s students clearly love the school, and one shared that she appreciated that they, “don’t have to sit at their desks all the time.”  “When you have a problem, they (the teachers) understand you and talk you through it.  They’re always there for you,” offered another.  One student joined me in the hallway to tell me that he liked the one-on-one instruction that his teachers offer and felt grateful that they work to “connect it to our lives.”  Maybe Thomas and her Morehead colleagues are on to something. 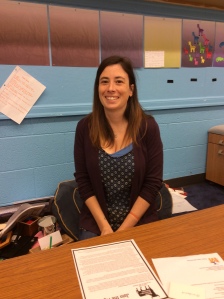 Academically and Intellectually Gifted program Teacher Jennifer Seelig clearly thinks so.  She loves the independent projects that students work on and the ways that they get to lead and help each other.  She relishes the opportunity to work with Lower Elementary students who are already functioning on, “5th, 6th, even 7th grade levels already.” 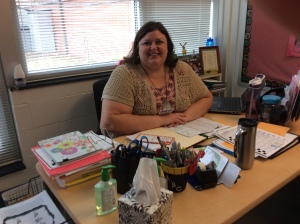 Music teacher Betsy Hughes flagged down Mr. Cason to share the school’s brash mission.  She walked us down to the separate building that houses the school’s media center and music and art classes.  Because of budget cuts, Hughes only works half-time at Morehead, but showed us the gorgeous instruments that the school’s PTA had helped her acquire, including a piano that was clearly impressive to both her and Cason (I trust them). 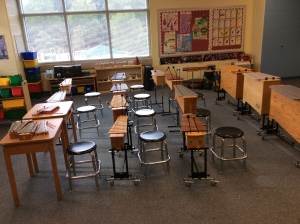 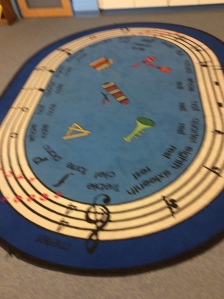 Laura Weaver also teaches at Morehead part-time because of funding limitations. The art teacher also raved about the PTA, and named the long-term relationships that the staff gets to build with students and their families as the school’s strength.  Every student who attends Morehead enters through a lottery at the youngest end of the school, so almost all of the students are there for their pre-K through 5th grade development.  This gives the staff ample time to build the kinds of deep relationships that allow young people to flourish.

Examples of student artwork dotted the hallway and adorned the fence that surrounds the school’s large outside area.  We walked around the path that the PTA created for the school, taking photos of giant flowers created during Peace Day last year, before we poked about the garden that the students have access to on a regular basis. 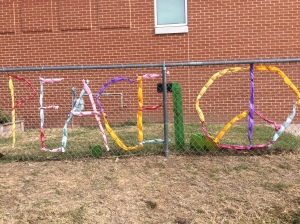 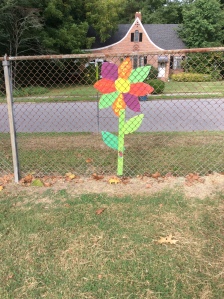 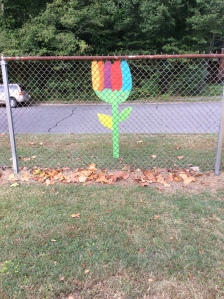 While I’m sure he’d deny the credit for it, Hughes said that Stacy Price deserved all the praise for the creation of the garden.  I had heard that I needed to connect with Price upon visiting the school, and watching him hustle through the hallway all morning made it clear that this was someone we needed to know.  Price is an Instructional Assistant and the school’s after school program manager, and he’s been connected to Morehead for 29 years.  The school, he said,  is his “home away from home,” and he lauded his co-workers for the ways that they care about each other and their students. 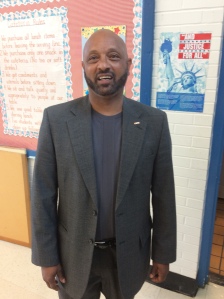 For Dawn Wilson, the “home away from home” metaphor applies as well. She attended the school herself, sent her son here, and has been an Instructional Assistant in the school for the last 7 years.  For her, the sense of community is the school’s strength, noting that “everybody helps each other out.”

Shaunesi Reed-Bledsoe considers Morehead home too.  Her own children also came to the school, and she’s worked here for the last 6 years.  Because it is so small of a community, everyone here has the opportunity to get to know one another, and she pointed out that everyone who works at Morehead is friendly.  She also noted that the school sometimes extends its collaborative approach to working with George Watts Elementary and Lakewood Middle School because all 3 are Montessori schools.

School Psychologist Sara Reynolds highlighted the Montessori approach as what makes Morehead good.  The students get to move around a lot, and they get to take a lot of ownership over their learning, both of which stand in contrast to the sometimes stifling nature of traditional schools.

Rinah Galper has found freedom in the Montessori method.  Having taught in a variety of settings before landing at Morehead this year, Galper stated simply that “love abounds” at the school.  The staff, she said, is “super committed,” and she’s witnessed a lot of “quality teaching and learning in the classrooms.”  She also gave the school’s Principal a shout out, acknowledging that Dr. Carmon always has her back.

Clifton Holley also always has the staff’s back.  The school’s custodian has worked the halls, classrooms, and grounds for 22 years and loves interacting with the Morehead students.  According to Holley, they are always friendly and take great pride in the school’s environment. 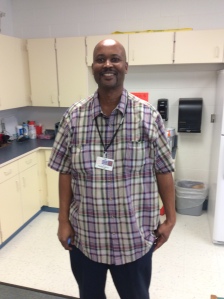 I caught EC Instructional Assistant Clarence Williams on the way to the cafeteria, and he said that he loves the ways that the wide variety of backgrounds among the students and staff all “mesh together.”  “Everybody helps everybody,” according to Williams. 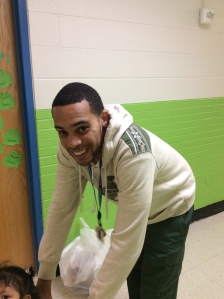 Tarkie Evans talked about this team mentality as well.  She’s been an Instructional Assistant at the Primary level for 2 years and loves the fun and exciting environment of the school.  “It’s exciting to come to work every day,” she added, “I love to educate young minds.” 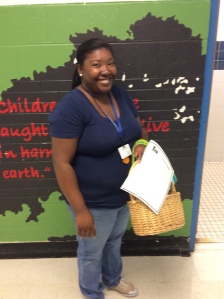 Primary Teacher Yevette Bryant clearly feels the same way.  She loves the ways that the Montessori methodology is more conducive to the natural learning style of most young people, and called the process “fun” and “intriguing.”  In the most resounding endorsement I heard all day, Bryant offered that, “it is an honor to be a part of this process.”

So there you have it, an expose on the radical educators in our midst, working hard to undermine the traditional school system from the inside out.  It was an absolute delight to spend my morning with these provocative teachers and their independent-minded students as they worked to create better human beings of themselves and each other. 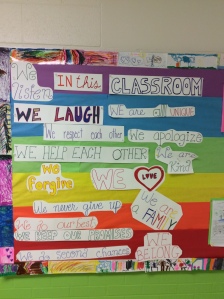 Keep pushing Morehead Montessori, and keep bringing your brand of crazy. Maybe someday soon we’ll all give the bubble-filling a rest, do some discovering together, and get a little bit more free.

Thanks for letting me in on your little secret this morning Morehead Montessori, I can’t wait to come back and learn some more.